Winter 2017 is certainly picking up in intensity across New England. After a strong storm brought 12-18" of snow and 4+ hours of blizzard conditions to much of Massachusetts, another storm is is expected to drop 1-2 more feet of snow from northeast Mass to much of the Maine coast Sunday through Monday night. Then there's a chance at yet another storm later in the week.

The National Weather Service posted Winter Storm Watches for MA/NH/ME Friday afternoon, then on Saturday afternoon about 4:30 PM, upgraded the watches to Winter Storm Warnings (as expected) and issued Blizzard Watches along the immediate coastline.

Winter storm warnings are now in effect for all in pink. Blizzard watches from Maine to Nantucket. https://t.co/GIDW3xJABI #nh1news pic.twitter.com/TsBsw5g8Sx

In 2017, there are many ways to get notified of these warnings, from the traditional local TV broadcast, to apps by major weather providers, to variable message signs along highways. Each of these can contain varying amounts of information. Obviously a highway sign conveys much less information than a human speaking with graphics behind them.

One solution I'm a big fan of are the weather alerts Google puts out. The alerts are well integrated into Android, the most popular smartphone operating system, and the webpage they link to is an excellent, concise tool for weather communication. When your current location is under a warning issued by the NWS, a card stating so will appear in the Android notification tray and on Google Now. A similar alert appears when you're browsing an area in Google Maps that is currently warned. 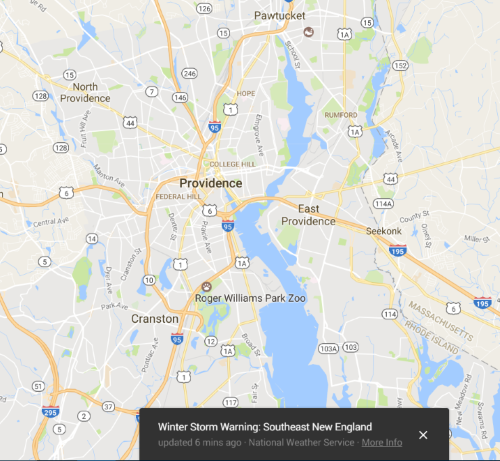 When you tap that alert on your phone or click "More Info" in Maps, you are brought to a page containing collection of information related to this Warning. This includes the original warning text, a map with the affected area outlined (all alerts are outlined in orange, not some other color scheme depending on what the alert is), preparation tips, the definition of what this particular alert is, and even tweets and news stories Google thinks is related to the alert.

Most weather apps simply provide the original warning text, and while the warning text often contain some calls to action, putting this information in context seems much more useful and more likely to elicit a response. Studies have previously shown than people often like to confirm weather information from more than one source or individual before reacting. If they were to come to this page and see a tweet from a local police department or a story from the local news station, that may be the additional trigger they need to take action. While I don't think you need to do much convincing for New Englanders to take a Winter Storm Warning seriously, these alert pages also exist for other events like Tornado Warnings, and could definitely be even more useful when minutes or even seconds count.